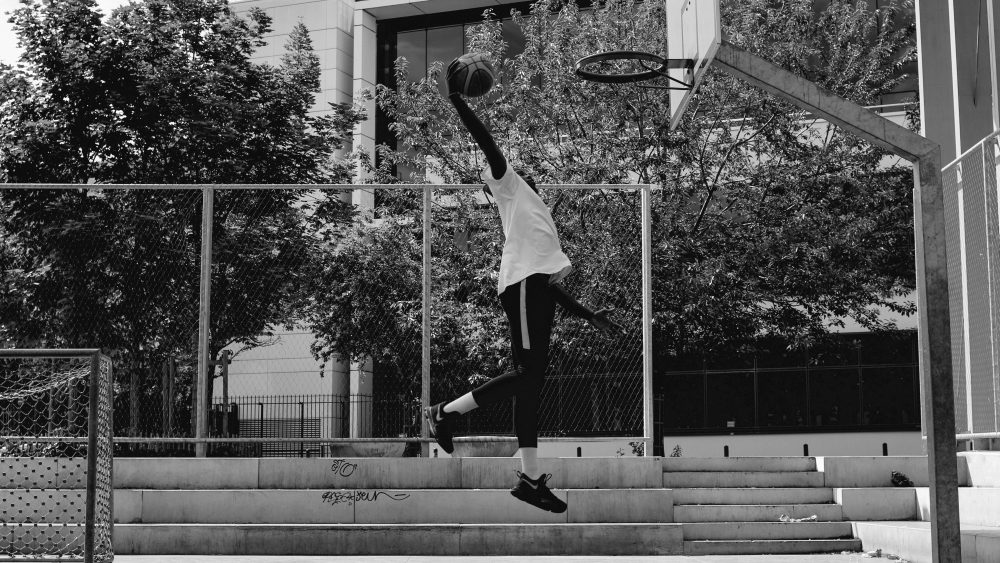 The most frequently asked question I receive from basketball players is, “How do I improve my vertical jump?”. I’m sure all basketball players that haven’t been blessed with freakish athleticism have tried to improve theirs at some point. If you’ve had a similar experience to me, you may have felt confused at times with all the information out there on this topic suggesting that there is a “secret exercise” to increase your vertical. Unfortunately, there really isn’t a “secret” as there are so many different factors which vary greatly depending on the individual when it comes to improving jumping ability. Hence, in this article, I hope to provide a framework summarising some key factors to help you critically appraise the jump training information you find and how it fits in with YOUR specific needs.

I have created this model based on the works of Drake Berberet @strength2.speed and Lance Brooks @lance_sportscienceguy. The model represents a simple framework for improving one’s jump performance. While it is just a general guide, in the end, I hope it can help you understand the complexity of jump training (which is often poorly portrayed) and make informed decisions regarding your jump training. 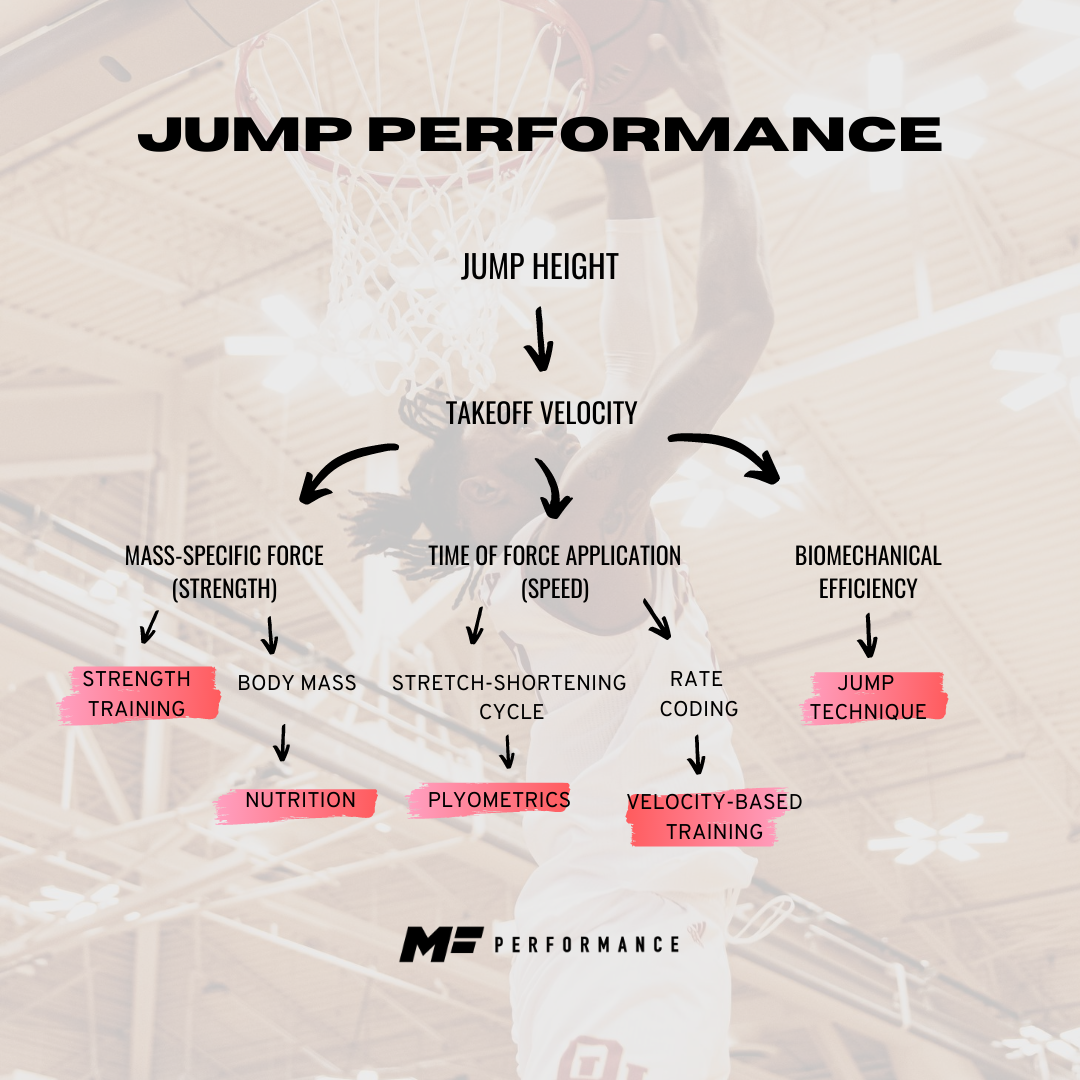 Jumping is a movement pattern heavily reliant on power – one’s ability to produce a high amount of force in a short amount of time.

In biomechanics, this is defined as…

Two major components of jump performance are STRENGTH (our ability to produce force) and SPEED (our ability to move quickly). Both of these physical qualities are trainable and should be targeted in all effective jump programs. While it may be great to have the strength to be able to perform a >2 x BW back squat, if one exclusively performs maximal strength training without focusing on speed, jump performance may be suboptimal as jumping is too quick of a movement to truly express one’s force-generating capacity at such slow speeds. Conversely, jump performance may also be suboptimal if one is unable to produce an adequate amount of force (lacking strength). Therefore, it is ideal to find a balance of these inversely proportionate variables (strength & speed) depending on the specific needs of the athlete.

Furthermore, another key factor of jump performance is one’s biomechanical efficiency (i.e. jump technique). A good example to illustrate the importance of jump technique for jump performance is how powerlifters who possess a high level of relative strength can usually perform really well in standing vertical jump tests, but may not be able to dunk a basketball despite being able to jump high enough. Ultimately, this is because jump technique refers to one’s ability to move as efficiently as possible, allowing one to effectively translate momentum from the approach into jump height.

From these three key factors, I’ve identified 5 components that can be actioned within one’s jump training program. They are:

To maximise your jump performance, I recommend considering how ALL 5 components are being addressed within your training regime. This doesn’t necessarily mean focusing on all of them at once but ensuring that at some point within your periodized program, all components are reviewed.

Maximal strength training has associations with jump performance since increased strength improves the athlete’s ability to apply higher force in the same amount of time which leads to an increase in jump height (Joyce & Lewindon, 2014; Sheppard et al., 2008). Especially for basketball athletes, relative strength is of great importance as increased body mass that often occurs with increased maximal strength may be detrimental to other physical qualities necessary for the sport. Relative strength refers to maximum force production relative to body mass.

Takeaway: Strength training should form the basis of all effective jump training programs as strength underpins power production. For basketball players, emphasis should be placed on the long-term development of relative strength, especially in movements such as squat patterns, lunge patterns and hinge patterns.

A greater percentage of body fat percentage reduces the capacity for a high vertical jump as body fat is non-contractile tissue – essentially, excess body mass tissue that doesn’t assist in power production. Additionally, excess body fat means that the body will be exposed to greater load upon landing which could potentially contribute to injuries over time (Joyce & Lewindon; 2014). Thus, it has been shown that individuals with lower body fat percentages exhibit higher vertical jump performance (Davis et al., 2003).

Takeaway: This may not necessarily be important for all athletes. However, as a general suggestion for basketball athletes with a body fat percentage of > 20%, consideration should be made to diet (food quantity, quality, timing) and lifestyle  (sleep and stress) factors to optimise body composition for the sport and jump performance.

Plyometrics training has been proven to be an effective method to improve power and vertical jump (Markovic & Newton, 2007). Plyometrics training emphasises the stretch-shortening cycle (SSC) whereby a muscle can express more power when the contraction is preceded by a lengthening (i.e. countermovement or preparatory movement). There are an extensive list of plyometric exercises but may broadly be categorised into fast (short ground contact time [GCT]) and slow (long GCT). Both have their place within programs but a few specific plyometric exercises incorporated with strength training is most effective than a large variety (Joyce & Lewindon, 2014). Examples include depth jumps, tuck jumps, release jumps and band-accelerated jumps.

Takeaway: Plyometric training can potentiate force production and power output when implemented with strength training, hence there should be a few key plyometric exercises integrated within all effective jump programs.

VBT is a resistance training method whereby velocity is measured and monitored to inform training and improve performance (Weakley et al., 2020). As load and fatigue increases, exercise velocity decreases. There is a broad range of VBT application but at its core, VBT aims to ensure maximal exercise velocity is achieved when lifting light/moderate loads (≤70% 1RM) which have been shown to correlate to improved vertical jump (Rodríguez-Rosell et al., 2017).

Most importantly, sound jumping movement efficiency is the basis from which strength and speed may be built on (Joyce & Lewindon, 2014). An athletes ability to generate power is only as relevant as their ability to efficiently express it. In other words, a powerful athlete in the gym may not necessarily be able to express their power in a vertical jump if they do not possess the movement proficiency required. In conjunction with athletes developing strength and speed by the means stated above, jump performance is optimised if athletes accumulate a history of high-quality jumping over weeks, months and years, considering the athlete’s physical robustness and injury-resilience.

Takeaway: Specific jump technique drills and exercises may be incorporated within a jump training program but above all, high-quality jump practice should be performed each week to improve jump performance.